Recently, we proposed you the unboxing of the 8850, submersive led light fixature (yes, you read rigth), invented by Tunze.

The atypic functionment of this led light fixature to numerous interrogations.

Two questions about the température:

Ø Question1 : Is the little size of the heatsink enough to refresh in emerged mode?
Ø Question2 : does the heat produced by the light warm the tank too much, and risk to lead to harmful conditions for the tank inhabitants.

Two questions about the performances in terms of light :

Ø Question3: as the light is below the surface in immerged mode, is it there some shadow zones with this display ?
Ø Question4 : Does the 8850 have the power needed for the coral growth, and if yes, for how much volume?

First of all, lets share our impress of the use of this light. And let’s start by the spectrum adjustment, which is atypical, but ingenious of simplicity: You just have to approach the magnet for the extremity of the light without electric wire and the spectrum will change.

As explaind in the manual, the light is monitored in order to not overcome 60°C, and this temperature is quickly reached (in emerged mode) ! Indeed the light cannot e handled after two minutes at full power. To adjust the spectrum precisely, that can need numerous tries, I advised you to do this operation in immerged mode, or by holding the led light fixature by the other magnet. Finally, this simple adjustment permited to answer to the first question.

Question1 : Is the little size of the heatsink enough to refresh in emerged mode? 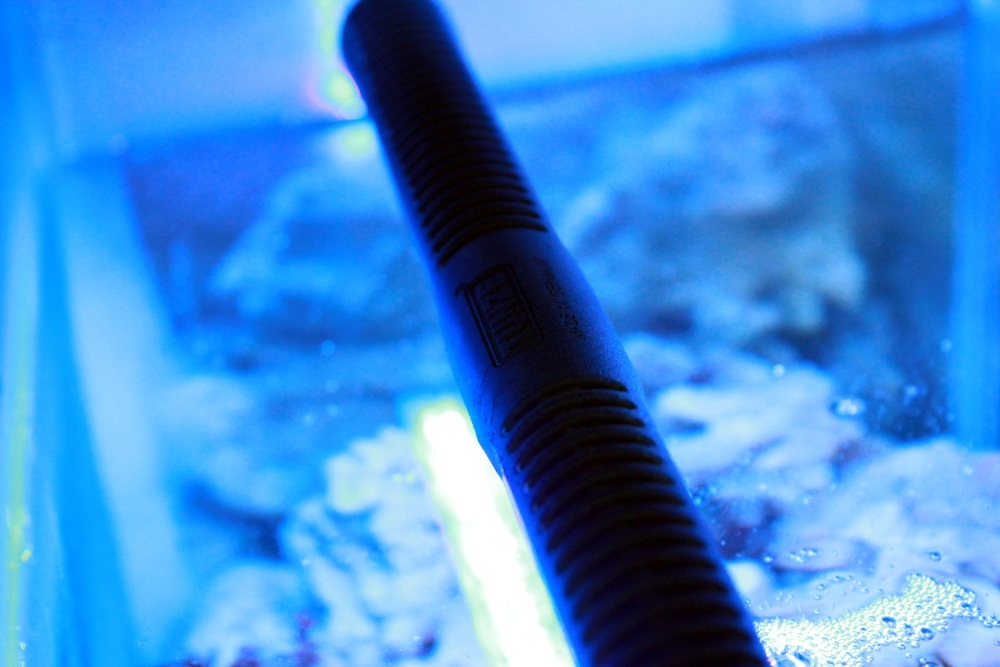 Answer 1 :
The small size of the heatsink does not permit a very efficient refreshment but it is balanced by the ability of the led light fixure to regulate itself in function of the temperature. This permit to this small dimension led light fixure to doesn’t use fans. This result bring us to the interrogation about the heat dissipation in immerged mode

Question2 : does the heat produced by the led light fixature warm the tank too much, and risk to lead to harmful conditions for the tank inhabitants.

Use the led light fixature is immerged mode is tempting, but due to the heat delivered in emerged mode, we can reluctant to put it in the tank. SO we realized the following experiment, in order to assess the amount of heat produced by the led light fixure

Experimentation description
Two identical plastic bucket were filled with 10,8 litters of osmosed water at ambiant temperature, in the late afternoon, in order to have it decreasing. One of the two bucket received the Tunze 8850 turned on at full power. The temperature is mezured at regular interval. Of course of this experimental conditions are not laboratory condition, but this test have the asset to be simple, easy to set up and understandable by everyone.
After 5h, the temperature in the bucket without led light fixature passed from 27 to 26°C whereas the temperature of the bucket with led light fixature reached 30°C. That means the 8850 delivered 180 000 joules in five hours, that is equivalent to a power of 10 watts.

The good news is this led light fixature will permit to save money on the heating, the bad one is that led light fixature can lead to critical situation within the summer. We have calculated for various tank size, for ten hours of use at full power.9,0

Answer 2 :
Under 30 liters, the temperature elevation is very difficult to manage. Beyond 30 liters, the fact that the led light fixature produce so much heat should’nt be forgot, especially in the case of the summer warmth. So, if you want to use this led light fixature, it would be judicious to use fan and water top off on your tank. In conclusion on the investigation about the temperature management, we can say that the amazing design of the 8850, which permit to be submersible, offer limited performance in refreshment, but Tunze have more than bag of tricks .
Indeed, the limitation of the power f the led light fixature in function of the temperature limitates the heat augmentation that would be harmful for the 8850, but limitates the performances in term of light. Now let’s focus on the test in terms of light

Lighting test
As explained in this , Récifal News’s team have its own Parmetre, from the brand Apogée, the description of our MQ200 is available here. For information, PAR means Photosynthetically Active Radiation, and it measures the energy available for photosynthesis. Hermatypic corals are mostly feed by the microlaguaes living in their tissues, and so recieces their energy from the photosynthesis. The PAR measurement permit to assess the ligth energy that will be available for the coral and so the performances of the led light.
This article from Advanced Aquarist proposes PAR values from various reef ecosystems, were coral can grow between 32 and 900 μMol∙m²∙sec, but some researches shows that corals saturated between 300 and 400 μMol∙m²∙sec. Acceptable PAR values are point of discussion, but we wiil consider the following reference par values:
· 100 μMol∙m²∙sec as the lower limit acceptable for soft coral and LPS
· 150 μMol∙m² .sec as the lower limit acceptable for SPS
· 200 μMol∙m² .sec as the maximum value useful , able to satisfy the most important needs

Question3: As the led light fixature is under the surface in immerged mode, are there more shadow zones than when it is emerged ?

We can think that it is the case but we have to take in account that in immerged mode:

There is no more reflexion or refraction due to the water movement at the surface ( there is still some refraction but in a stable way ).
The led light fixature provides a higher light intensity due to water refreshment and the management of the power of the electronical card.
As the led ligth fixature’s beam is quite concentrated , measures took too far from the 8850 are not relevant. Here are the minimal depth where we can find references PAR, at 5cm from the side (axis X) and at 10 cm from the extremity of the led ligth fixature

It is constaed that the beam seems to be lightly more opened on emerged mode, but this dfferences is very little if we take in account the difference of 7cm heigth between the two positions.
The fact that the power delivered by the light fixature is higher in immerged mode and that light reflexion and refraction are modified in this position explains there are no more shadow zone in immerged mode than in emerged mode. So it also give the information that the 8850 is able to deliver the PAR poxer needed for coral growth. Ok, but for how much surface or how much volume?

Question4 : Does the 8850 have the power needed for the coral growth, and if yes, for how much volume?

Previous table has show the depth from we can find values that permit coral growth, but it is interesting to know how far it is possible to find them (at the drip line of the led light fixature, at 5cm from the extremity of the 8850)

Due to the it’s size, we can only be agreeably surprised by the power delivered by the 8850! Without any surprise, the immersion improves performances, in a lightly way if w take in account the height difference of 7cm between the two positions. Now we can ask which surface receive enough light. As explained before, PAR measures are made every 5cm, so it is interesting how far from the drip line of the led light fixature we can find the PAR references

It have already been notice that the 8850’s beam is very narrow, and it is confirmed by the fact that we don’t find reference PAR further than 5 cm from the drip line of the led ligth fixature in emerged mode instead of 10 cm in immerged mode. As the measures are took every 5cm, it is also important to know maximum PAR values at the other point of measurement.

This results matchs with the one of the previous figure and confirms that the spectrum is both powerfull and narrow !

Answer4 :
the 8850 have the power needed the for the coral growth, on a wider surface when it is immerged.

Thanks to the numerous measures, we can assess which tank volumes are suitable for the 8850 :

Due to the thermic gain in immerged mode, the 8850 is not possible for a volume of 17,5 liters. The volume that can be used in emerged mode is very small, but it is possible to use several led light fixature for bigger tanks, with a led light fixature for every 15cm of width. In this case, it would be useful to know if we can rule several 8850 with the single controller 7097.

As promised, here is some photo of the render of the 8850.

Euphyllia under blue and white ligth: 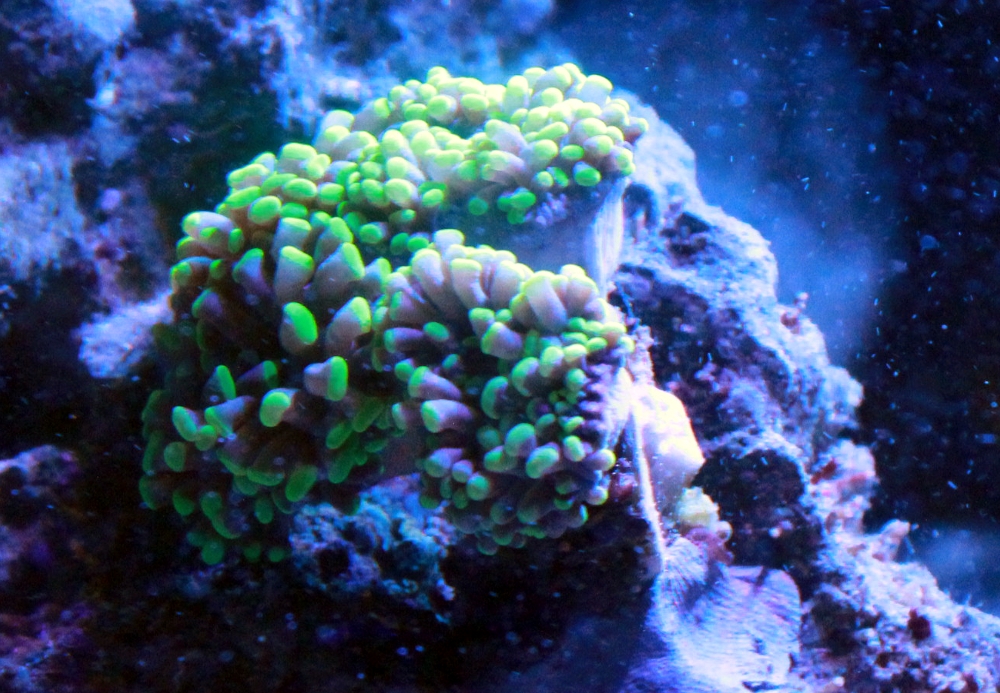 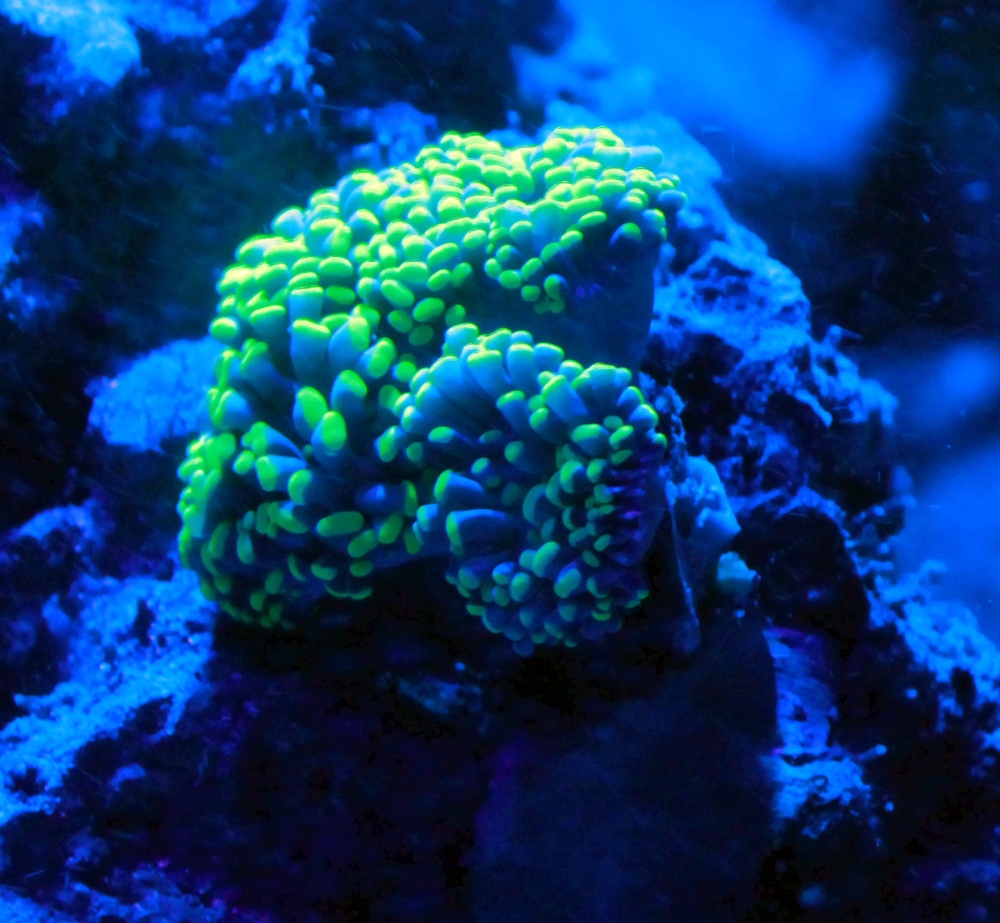 The render under blue ligth is very nice, here is the result on the red montipora 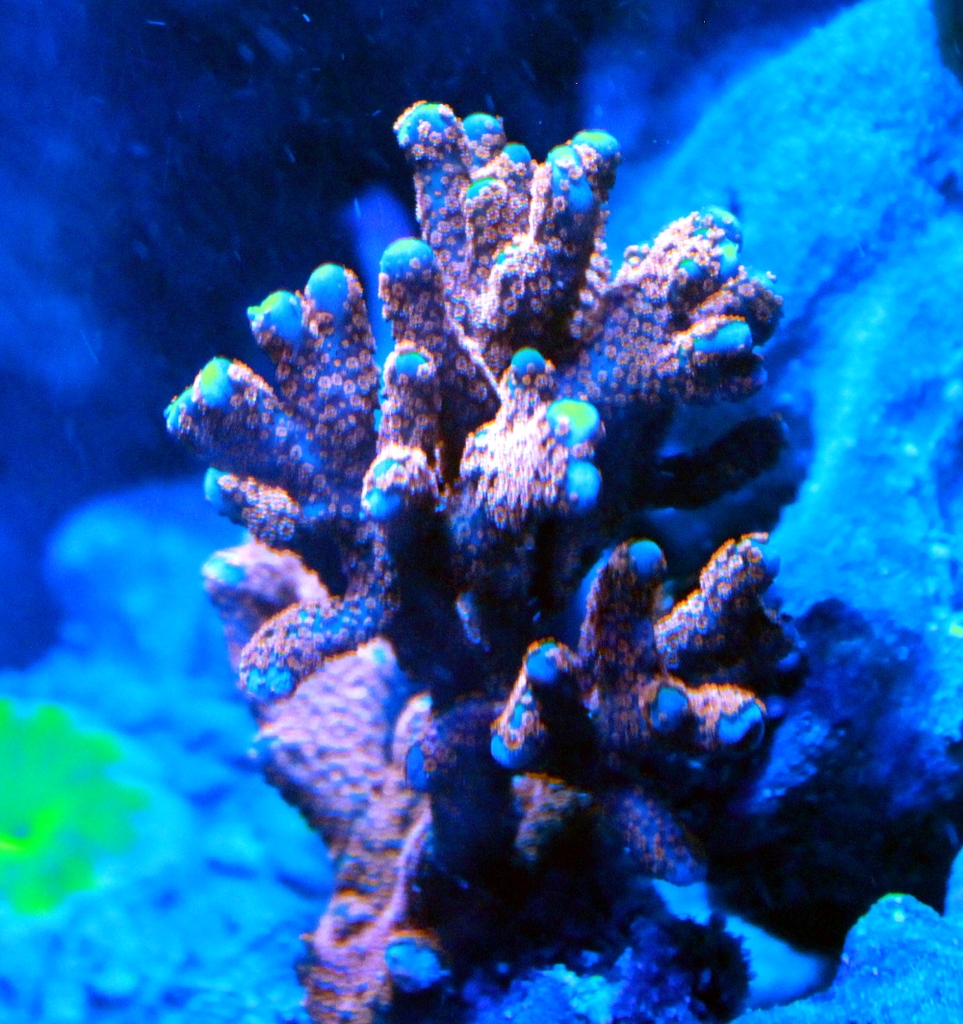 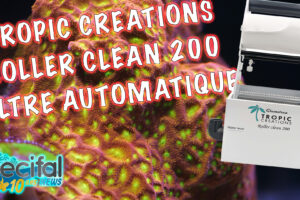 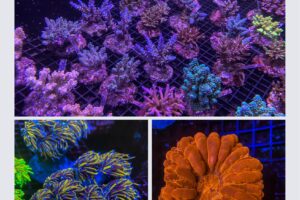 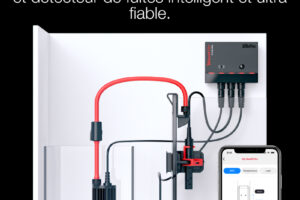